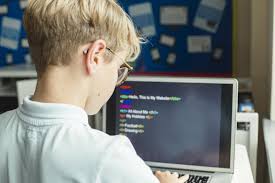 Coding has become extremely popular in recent years. One of the reasons why that happened is partly due to the enormous scope it offered in terms of knowledge and the ample future opportunities it opened up. Another valid and important reason for this renewed popularity of coding is also the several institutes that have opened up and in a way popularized programming courses. There is just so much potential in the field as a whole that it makes sense for a parent to enroll their children in one. Various institutes are offering interactive and engaging Python classes for kids. There is just a lot that one looks forward to in those classes. This is why there is such a rush among parents to enroll their children in those classes. One of the other important things relating to this is many schools have also chosen to incorporate robotics modules in their daily teaching program, due to the important advantages they provide to a student.

So, beginning with the several advantages that Python provides, one is the immense future career scope. Every parent wants the best prospects for their child. Several studies and research conducted over the years have all indicated that a person well-versed in Python is likely to earn much more than an average employee that does not have that skill. Hence, it becomes increasingly important to enroll a child from an early age in programming skills so that they can build a stronger foundation of knowledge. This is also one of the frequent reasons cited by many parents. One of the other best things about the Python language is that it is robust and scalable. There are also several extensive graphics and visual options available in the Python language that makes it the perfect choice to be used in data science. Also, one of the things about data science is that it is slated to become one of the most important domains in this century and it has a lot of potential.

Therefore, it is quite clear that learning Python gives that person an edge in the field of data science as well, which can be highly advantageous. This is a pretty important reason that gives Python an edge in terms of popularity among all other programming languages. The simple nature of the syntax of the Python language also makes it endearing to beginners. It is far less intimidating and complicated than other programming languages that are used. Most people can be intimidated by coding at first and it might also seem to be a little too complicated. Here, Python can help since it is much more interactive and its simple syntax, combined with a vibrant community can help a person, who is just starting out learning the Python programming language. Most programmers also point to the Python language as being an efficient, fast, and much more reliable programming language than its competitors. This is also one of the important factors behind the huge popularity of Python among programmers. The fact that it is highly versatile also helps. The use of Python in AI, ML, and so many other emerging fields is only going to increase its scope even further.