Python has emerged as one of the more popular programming languages. There are a lot of elements to the Python language that makes it so popular among people looking to code. At any programming institute, you are likely to find an online Python course for kids. This is because the several advantages of the Python language make it easy to learn programming language. First of all, fuelling the renewed popularity of Python is its scope. Learning Python and being able to utilize it can lead to a very prosperous professional life. Already, it has been seen across multiple studies that an average Python programmer earns significantly more than programmers working with other programming languages. 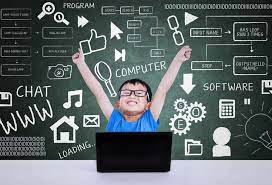 Python shines both in terms of efficacy and the scope of its application. This makes it one of the safer bets in the present job market. Also, since the use of Python spreads over quite a few key domains and areas, it makes the language all the more relevant from a professional sense. Another very important aspect of learning Python is regarding its use in the evolving technological fields in recent times. A pretty common use of Python is in the Machine Learning (ML) and Artificial Intelligence (AI) domains. Both ML and AI are important domains that have come into the limelight in recent years. Their importance is only slated to increase in the coming areas with several industries steadily going for much more automation.

The reason for the prominence of both ML and AI is based on their inherent potential. One of the most important things to remember in this case is that Python is one of the most compatible programming languages for both those fields. The extensive list of libraries and frameworks in the Python language is well-suited to develop new ideas. Automation companies have become pretty much dependent on the Python language due to its usefulness. Another big industry within the technology domain is undoubtedly data mining. Data is the primary driver of today’s growth in companies and it has been used to its maximum capacity by companies using appropriate tools and techniques. This is the reason why there is so much emphasis on data mining and analysis.

For both data mining, interpretation, and subsequent analysis, Python is really important as it is well-suited for such tasks. The capabilities of Python help us analyze large datasets with relative ease. Python offers a much more productive coding environment than its competitors such as C++, or Java. Many experienced programmers have also pointed out that they tend to stay much more productive when learning Python. Python is also very easy to read. This is why many argue that it is the perfect coding language for kids. Anyone can just start to work with the programming language. There is a good reason behind its immense popularity. Among all the programming languages, Python is the most versatile as well. It runs smoothly on all computer platforms such as Windows, Linux, Mac OS, etc. Python also has an extensive library backing it up, making it one of the most well-supported programming languages around.